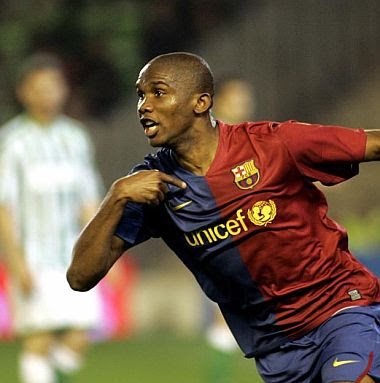 Last night's convincing win at the Stadio Olimpico made Barcelona the undisputed kings of European football and in most observers' eyes the greatest club side in the world today. But while his teammates woke up to huge acclaim from the global soccer community, goalscorer Samuel Eto'o admitted he was 'gutted' after marking his 10th minute strike with a weird celebration where he kept tapping his arm like some sort of smackhead.
Eto'o has a good track record of successfully running away pointing to his chest after scoring in major tournaments (left), but admitted that the occasion got to him as he faced up to one of the biggest celebrations of his career.
'I never really expected it to go in,' said the Cameroonian predator, speaking through an interpreter. 'I thought he (gangly stopper Van der Sar) would save it. But once he (Van der Sar) had let it in, I was like, shit, how do I celebrate?'
'My mind just went blank. Obviously later I thought back to all the things we worked on in training - touching the badge, looking up to heaven, maybe even that thing when you point to your ear - but in the heat of the moment I just couldn't seem to do any of it.
'For a few seconds I was literally just running in a straight line without doing anything at all. Then I heard (Lionel) Messi shouting what sounded l 'touch your arm, touch your arm' and I just went for it. Once I'd done it, I had to commit to it, and I ended up whacking it over and over again. I had no idea why I was doing it.'
'I looked like a right prat,' added a gloomy Eto'o.
Victorious manager Pep Guardiola admitted that the striker's poor celebration had 'kind of spoiled the victory for him. 'We play brilliant tonight,' he told reporters, 'but people will not say, Barcelona play brilliant. They will say, Eto'o, why does he do this with his arm? Why he doesn't pull shirt over head like other players?'
Vowing to bounce back from his setback, Eto'o announced that he was 'lining up a really great celebration' for the next time he scores. Although no further details were supplied, a report from an insider in the Barca camp suggested that Eto'o had spent much of the flight home 'running up and down the aisles like a crazy man, twirling his shorts around his little finger'.
Posted by MWatson at 06:43