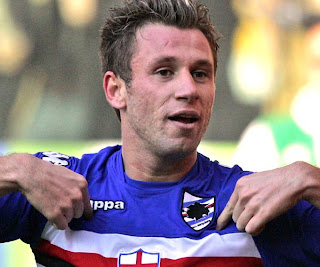 Sampdoria striker Antonio Cassano has denied reports of a bust-up with a delicious pie, insisting that his relationship with pie remains as strong as ever.
“I’ve had my problems in the past, with managers, referees, journalists, even with my own team-mates” admitted the 27-year old. “But with pie? Never. Pie has always been my good friend. These stories are simply false.”
According to reports in the Italian press, Cassano has been unhappy with the way that pie is frequently flaky, with an insufficiently moist filling to compensate for the dryness of the outer crust. Fan forums have linked the striker with a move for a tray of macaroons, while Twitter was recently abuzz with rumours of a link-up with baklava.
But the former Real Madrid and Roma man insisted he was happy with the pie on offer at Sampdoria, and was in fact making plans to extend his belt.
“I’ve spoken with the manager and the chairman, and with my agent, and before Christmas we’re all going to sit down together and sample a huge selection of pies. But I’ve made it clear that I can see myself eating pie at the Stadio Ferraris for the rest of my career, as long as the pie on offer remains the right pie for me.”
Sources close to pie were also quick to deny the rumours. “Anyone who suggests there are problems between pie and Antonio knows nothing about pie,” a spokesbiscuit told reporters yesterday. “These allegations are as baseless and insubstantial as a meringue.”
A return to the national team for Cassano looks unlikely, though, as Italy boss Marcello Lippi still blames him for the disappearance of all the after-dinner biscotti following a clash with Norway in 2005.
Posted by John Foster at 19:35