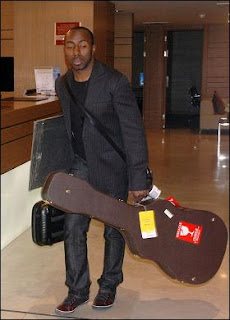 Darius Vassell's incomprehensible spell in Turkey is drawing to a disappointing conclusion, but the decent-enough striker's agent has pounced to secure him a high-profile return to the UK, supporting Congolese influenced American indie outfit Vampire Weekend on their forthcoming tour.
After a career of modest achievement, described in his recent autobiography 'Darius Vassell: Respectable Player, Reasonable Life', the diminutive frontman shocked the football world last summer by joining Turkish minnows Ankaragucu.
An uneasy Vassell was given a hero's welcome and briefly became President of Turkey but the bubble burst when Ankaragucu realised they had spent every penny they had (and several million pounds they didn't have) on the England international.
Overnight Ankaragucu folded with the club rebranding itself as a meat-packing enterprise, but Vassell's agent Michael Lowe moved quickly to spare his client from an early morning tripe packaging induction and book him in as the support act for Vampire Weekend on their February 2010 UK tour.
"I just made some calls to a few people and after several hours we had a deal," Lowe enthused. "This is a great switch for my client and I'm sure we'll see the real Darius Vassell in England."
While his representative seems upbeat, Vassell was a little more cautious as he left the Crowne Plaza Hotel, still cramming bottles of shampoo into his backpack.
"I guess I'll give it a go, but it's not really what I had in mind when I suggested a move back to England," he admitted.
"There are some tough tests ahead with trips to Manchester, Leeds and Birmingham in quick succession - that will be an important period for me."
The Vampire Weekend are known to be long-term admirers of Vassell and a source close to the band insisted they are "thrilled" to have been given the chance to play alongside the pint-sized predator.
Posted by Paul Watson at 02:17