Gerrard secretly hoping for injury to get worse 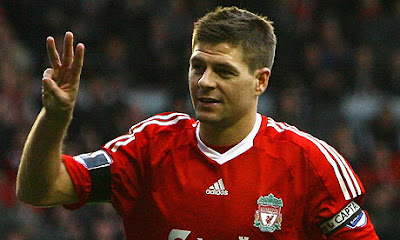 Fed up with having to carry an entire team of under-achievers, long-suffering Liverpool captain Steven Gerrard is now actively seeking a worse injury than he already has, according to sources in the Anfield camp.
Despite being less than fifty percent fit, Gerrard limped off the bench last night to save a point for the inconsistent Reds, coolly slotting home a controversial penalty with his one functional leg. It was the latest in a series of heroic rescue missions by Liverpool's overworked talisman. Earlier this season he notched the winner at Bolton despite being unable to walk, diverting a Yossi Benayoun cross into the net with one of his crutches. And last year, the 29-year-old famously netted two goals against Real Madrid despite being in a coma, after boss Rafa Benitez picked him ahead of a fully fit Dirk Kuyt.

But an unusually frank interview after last night's disappointing draw suggests that Gerrard is coming to the end of his patience. 'I've had enough of playing alongside this shower of shit,' the Liverpool skipper told a startled press conference. 'It's all right when Fernando [Torres] is around, but the rest of them, I ask you.'

'I mean, who the hell is David Ngog? Is he even a professional footballer? It looks like some sort of anagram.'

There are fears among those close to Gerrard that he is now on a mission to collect a season-long injury, after Sky TV action replays showed him deliberately trying to get hit in the face by a Cameron Jerome shot, lying down in front of Sebastian Larsson in the hope of being trampled by the Birmingham player's studs, and leaping onto the bonnet of Albert Riera's BMW in the car park afterwards. An Anfield insider commented: 'We're all worried he's going to do something really stupid next, like swallowing poison, or playing in England's pointless friendly against Brazil.'
Posted by MWatson at 03:22