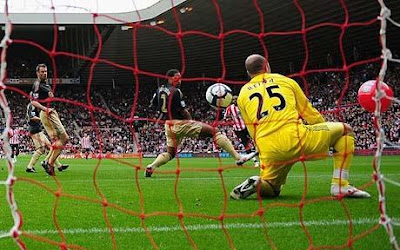 The fan who threw the beach ball that deflected a Darren Bent shot goal-wards to sentence Liverpool to defeat at Sunderland has hit out at the press for “only focusing on my bad games”.

Liverpool have a proud recent history of threatening a title challenge before dropping points against the Premier League minnows and slipping out of contention.

But it seems Rafa Benitez has decided to fast track the process this year and leave the title race before the New Year.

The Anfield outfit suffered a costly loss to Sunderland on Saturday after a Liverpool FC beach ball struck a Darren Bent shot and helped it into the net.

It has been a nightmare week for the man who threw the novelty gift, but he believes his record speaks in his defence.

“I’ve been doing this for years and one blip like this won’t affect me,” Mark Evans declared at his press conference this morning.

“I’m confident in my ability to lob an inflatable and I know that this was a one in 100 mistake.

“What really gets to me is that the press only want to know when it goes wrong. Nobody runs stories about my triumphs and I proved at Stoke that I can land a blow-up banana on a sixpence. I’ll be back for the Lyon game and I have every confidence I will deliver.”

Meanwhile, the beach ball has been given an honorary season ticket at the Stadium of Light and will do a lap of honour before the next home game against Aston Villa.
Posted by Paul Watson at 03:51