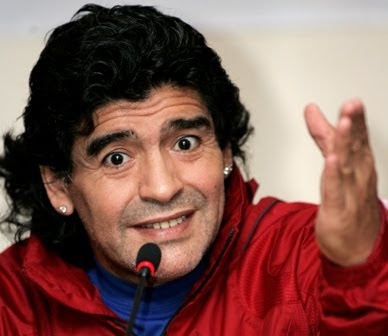 Unhinged Argentina coach Diego Maradona saved his job by scrounging World Cup qualification with victory over Uruguay last Wednesday but may lose his job after performing the ultimate angry celebration.

Maradona managed to guide a star-studded squad of world-beating stars to South Africa by dint of being the fourth best team in South America.

Enraged by media suggestions that any idiot could do the job just as well with Lionel Messi and Co. at their disposal, Maradona politely turned down the chance to show dignity in the face of modest vindication and proceeded to “lose his shit” on live national TV.

In a four-minute interview the curious little man vented his grievances against Argentine journalists, Uruguay (and especially its female population), drugs in sport, FIFA and woeful Only Fools And Horses spin-off ‘The Green, Green Grass’.

While FIFA chief Sepp Blatter has indicated he agreed with Maradona’s measured criticisms of the jaded vehicle for two of Only Fools And Horses’ weaker characters, he has been forced to launch an investigation into the other targets for Diego’s rage.

The outburst has cast fresh doubts over whether Maradona will lead Argentina to next summer’s World Cup, where they will light up the group stages before letting indiscipline cost them dear in a quarter-final loss to Germany.

Maradona has refused to comment on his future except to mumble that the situation is “all a conspiracy created by the Mafia or NASA or someone.”
Posted by Paul Watson at 04:10