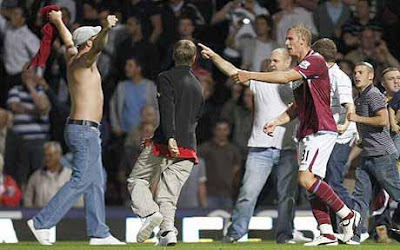 For the first time in memory, the Carling Cup captured the nation's attention last night as London's human vermin used the tie between West Ham and Millwall as a chance to trash large parts of East London.
The news that the two sides had been paired together in the second round draw brought about a mass exodus of the area surrounding Upton Park earlier in the month as thousands of homeowners sold up, bringing property prices crashing to a record low.
And the pessimists were proved right as hundreds of dickheads, who could barely name a player in either side, fought running battles around the stadium.
On the pitch, Premier League outfit West Ham made hard work of seeing off an industrious Millwall side but won the game in extra-time, sentencing chimpish tactician Gianfranco Zola and Co. to another mid-week fixture with the possibility of several more draining mid-week dates and the outside chance of losing to Chelsea or Manchester United's reserves at Wembley in February.
Last night's events have cast yet another shadow on a grim, old tournament, but sponsors Carling were determined to take a positive view.
"It's nice to see that people really care about the Carling Cup," a spokesman insisted. "Of course tempers will flare when you have this much at stake.
"But in many ways what we saw was the perfect advert for the Carling Cup. A huge number of repugnant examples of humanity drinking Carling, watching mediocre football and behaving like animals."
Posted by Paul Watson at 05:07