Reo-Coker "will not shut up" about The Time Traveler's Wife 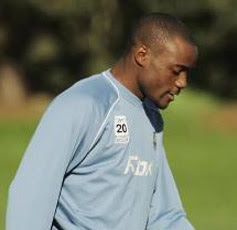 With last week’s release of the film version starring Eric Bana and Rachel McAdams, Reo-Coker’s enthusiasm for the bestselling romance novel, a present from his sister last Christmas, has reached an all-time high.

"Nigel asked me again if I’d finished it", team-mate Nicky Shorey told reporters. “I think he was a bit disappointed I hadn’t. He lent it to me about six months ago. I’ve read the first twenty pages two or three times, but to be honest I don’t get what he sees in it.”

"I actually think the one he lent me was brand new", added Shorey, fuelling speculation that the hard-running Reo-Coker may possess multiple copies of the escapist fantasy. "I know he’s lent it to Luke [Young] and Brad [Guzan], and I think Zat Knight still had a copy when he went to Bolton."

New signing Habib Beye shared a room with Reo-Coker as Villa travelled to Austria for a Europa League play-off against Rapid Vienna.

"The other lads seemed very keen to avoid Nigel", said the ex-Newcastle full-back. "He kept talking about how amazing it would be if during a match you travelled back in time and arrived in another match, like, ten years ago. I didn’t want to be rude so I let him talk and talk. I agreed to go and see the film with him tomorrow evening just so he'd shut up about it."

This is not the first time Reo-Coker has become obsessed with an emotionally-charged potboiler about life, love and human relationships. When he left West Ham in 2007 it was widely reported that his incessant praise for The Shadow of the Wind by Carlos Ruiz Zafòn had contributed significantly to the breakdown of his relationship with manager Alan Curbishley.