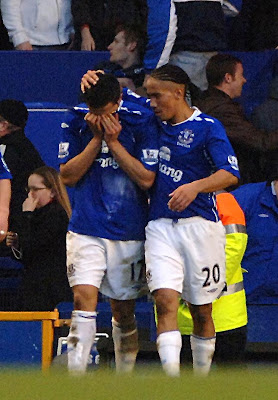 Survivors of the tsunami which devastated Samoa this week have spoken of their relief and gratitude after Tim Cahill's goal celebration, following his winner against BATE Borisov, went a long way towards relieving the suffering caused by the natural disaster.
The Australian striker - who represented Samoa as a schoolboy - mimed paddling a canoe after his 80th minute strike had given Everton victory in the latest of the 972 matches making up this season's Europa League, and later explained that he intended the gesture as a mark of respect to the many islanders who lost their lives or homes in the catastrophic events. But the explanation was hardly necessary for the delighted Samoans, who hailed the celebration as 'exactly what we needed after a tough week'.
'This is really good of Cahill,' said Sammy Massa, whose house was destroyed by the flood-waters on Wednesday. 'Having spent the past 48 hours sleeping amongst the rubble of my former belongings and appealing for news of my loved ones, I was in two minds about watching BATE Borisov v Everton at all. I felt like I could probably put the ninety minutes to better use foraging for food, or something like that. But when I saw Cahill pretend to be in a boat, I knew it was worth it.'
Other survivors reported 'strong feelings of optimism' after the Everton hitman's efforts. 'It's given us a big lift,' one community leader remarked as he rigged a tarpaulin to shelter a family of twelve. 'Food and clothes and things are all very well, but you can't beat getting a mention in the Europa League. Especially after they'd come from behind and everything. That showed a lot of courage.'
Cahill has previously mimed being in handcuffs to show solidarity with his brother, following his imprisonment, and in the wake of 9/11 he showed his support for New Yorkers by miming a fireman bravely entering the Twin Towers only to be beaten back by the heat.
Posted by MWatson at 15:17