SEASON COUNTDOWN: Fergie Rages At Fixture Congestion As United Are Forced To Play Other Teams In League 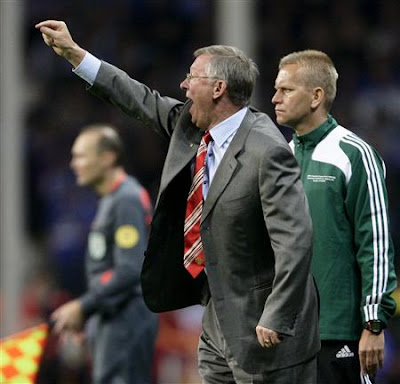 Sir Alex Ferguson today opened this season's war of words with other managers before the first ball had been kicked, alleging that defending champions Manchester United were being discriminated against by the fixture list, which obliges them to play every other team in the Premier League, home and away, as well as participating in cup competitions and travelling to various parts of Europe.
'It's just unbelievable,' fumed the permanently aggrieved boss, whose career-long opposition to 'fixture congestion' is so fierce that he famously withdrew United from all competitions in 2003-4, and attempted to pull his team out of a Champions League Quarter-Final with Bayern Munich twenty minutes before the end. 'We have to play Fulham, Wigan, Stoke... you name it. We are literally playing teams almost every week. There are some weeks we have a game on Tuesday, then again on Saturday. That's two football matches in five days. I mean, how do you expect players, on what we pay them, to find time for that?'
The enormous burden on United's squad, Ferguson alleges, is in stark contrast to that faced by their main rivals for the title. 'Arsenal only played twelve games last season. And I know for a fact that Liverpool haven't played Portsmouth for eight years. But this is what you expect at Manchester United. Everyone hates us. Everyone wants us dead.'
Ferguson, who was speaking out against the fixture pile-up from United's hotel in Singapore, where they are playing eleven matches for £100 million a time to 'help promote football in this part of the world', remained bullish about United's prospects for yet another league title, despite the immense, ongoing conspiracy against his club. 'I'm sure we can cope with it, but it might mean having to expand our squad a bit more than I'd anticipated. Luckily we're very good at stealing teenage players from poorer clubs who've spent years nurturing their talent.'