Adebayor: 'This Is Totally About The Money' 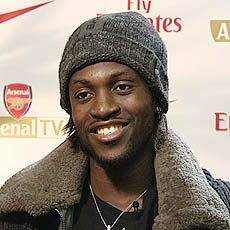 Days after Gareth Barry and chief executive Garry Cook angrily refuted the idea that the summer's exodus towards nouveaux riche chancers Manchester City has largely been motivated by money, latest recruit Emmanuel Adebayor confirmed today that he was 'delighted to be getting a great big chunk' for the move North, and was looking forward to 'competing for major honours with City, but more importantly, having a huge great mansion in Cheshire and driving a vintage car around.'
Togo marksman Adebayor represented Arsenal with distinction for several seasons but became restless last season. He put in a transfer request, saying that he needed 'a new challenge, and about £350,000 in signing-on fees'.
'When I heard City were interested,' said Adebayor, 'I was keen straight away. Not so much for footballing reasons - after all, I was already at one of the most attractive sides in the country, and had guaranteed Champions' League football - but more because I knew I would absolutely coin it in if I went there.'
'Now that the move has been completed, I'm delighted. I'm fantastically rich now. I was earning a lot at Arsenal, but trust me, this is a whole new level. I am fucking minted. This is great.'
Adebayor had words of encouragement for City fans, too, claiming that the hastily-assembled, mercenary squad would 'go all-out to bring trophies' to the Eastlands club. 'Apparently we're on a big win bonus for every game,' said the Togolese centre-forward, 'and then on top of that, sweet extra bonuses if we, like, get into Europe and shit. So we'll definitely be trying to do all that, I reckon.'