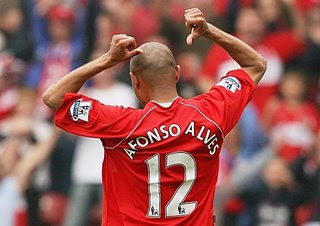 With star assets Tuncay, Mido, Alfonso Alves and Stuart Downing either gone, openly soliciting a move, or dicking about somewhere in Africa and not replying to his text messages, put-upon Middesbrough manager Gareth Southgate admits that he wishes he hadn't told players that he 'only wanted people who are ready to die for this club.' Since Southgate made this emotional appeal, 29 of the 32 players under contract have left or submitted a transfer request, and the softly-spoken boss conceded yesterday: 'It would have been better just to say something like, I only want players who are really committed. Or just: 'let's all do our best this year''.
Southgate broke out the rhetoric a fortnight ago as transfer speculation dogged his newly-relegated squad. According to Riverside insiders, he was dismayed by - among other failures of team spirit - Downing attending the team meeting already wearing an Aston Villa shirt, and £12.5 million flop Alves shouting 'SO LONG, SUCKERS!' as he drove away from the ground in his Porsche. 'From now on, if you're not prepared to die for Middlesbrough, don't bother coming in,' said Southgate, pausing briefly to allow Tuncay to slip past him to the car park. 'If you don't eat, drink, sleep and shit Boro, there's no point in you being here. I don't care how many players leave, as long as I'm left with people who will walk through fire for Middlesbrough Football Club.'
Transfer requests began to flow almost immediately after this ultimatum, with the entire first-team gone by the end of the day. Many Boro players felt Southgate had set the bar too high. 'I mean, I quite like it here,' said defender Justin Hoyte, 'but who wants to die for Middlesbrough!? It's silly. The ground wasn't even full for half our games last season.' Popular German centre-back Robert Huth agreed, saying: 'Huth will play hard for Boro. Huth will sweat and toil for Boro. But Huth will not go to the grave for them. Huth still has much to offer this world.'
'If he asks us who will get a bit hurt for Middlesbrough, then maybe, OK, I am interested,' remarked playmaker Julio Arca. 'But death is the great unknown. Which of us will walk into the dark, into the infinite, of his own free will? Death is the river which all men must cross, but we cross it only when the ferryman can wait no longer. Also, I can get more money if I go back to the Premier League and half-heartedly play for Blackburn or someone.'
One of the few remaining players, David Wheather, said he would be staying, but 'hoped the gaffer [Southgate] wouldn't call our bluff on the whole dying thing. I was put off a move to Wolves because Mick McCarthy said he wanted players who'd cut their brother's eyes out and spit in the holes for Wolverhampton.'
With only a few weeks to recruit an entirely new playing staff, Middlesbrough are reportedly in talks with the similarly-understaffed Newcastle about a merger. Southgate said: 'if that does happen, I will only want players who are prepared to die for whatever we decide to call the new team.'