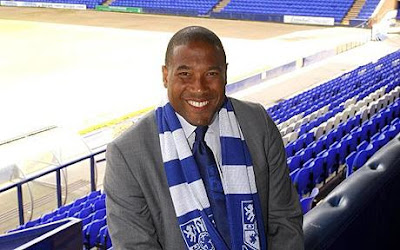 A rusty John Barnes marked his return to management, at Tranmere Rovers, by delivering a rap wearing a shell-suit and lecturing his new players on the merits of isotonic Lucozade, it was reported today.
Former England star, dubious musician, hapless TV presenter and peculiar suit-wearer Barnes landed the Tranmere job last month, but detractors claimed that he was out of touch with the English domestic game, after a period in the wilderness managing Jamaica, appearing on celebrity dance programmes, and looking the wrong way during live broadcasts. These allegations were backed up by Barnes's introductory meeting with the Tranmere squad. 'You've got to hold or give, but do it at the right time,' Barnes told his new charges. 'You can be slow or fast, but you must get to the line. They'll always hit you and hurt you, defend and attack. There's only one way to beat them: get round the back.'
Barnes's assistant Jason McAteer seconded his boss's advice, adding: 'We're singing for England. Arrivederci, it's one on one.'
According to sources, Barnes went on to brief his players on their after-match fluid intake, advising them: 'After ninety minutes of sheer hell out there, you're thirsty. Isotonic Lucozade gets to your thirst fast.'
Barnes's words received a mixed reception from Tranmere players, with midfielder Chris Shuker admitting: 'We thought it was going to be more about the new season and our roles within the club, but he seemed very keen to rap. Would you call that rapping? I don't know, it sounded more just like talking, really.'
Veteran defender Ian Goodison added: 'He seemed really keen to talk about Lucozade. I didn't even know you could still buy that stuff. It tastes like shit.'