Angry Chelsea 'will fight for their right to buy success' 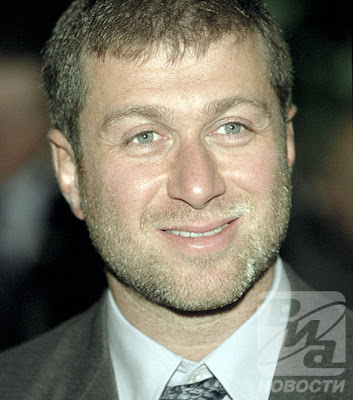 Chelsea today confirmed that they would appeal against a 'completely unfair' FIFA ruling which, if upheld, will force them to stop throwing billions of dubiously-earned oil money around and compete on equal terms with the rest of the football world.
After illegally capturing Gael Kaukta from Lyon by negotiating secretly with his parents just three months after his conception, Chelsea were sensationally hit with a transfer ban which prevents them from buying any more silverware until 2011. But super-rich owner Roman Abramovic, who picked up Chelsea as a briefly amusing toy in 2003, vowed that the Blues would 'fight tooth and nail to regain our right to trample the rest of the football world underfoot'.
'It's completely insane,' said Abramovic, speaking from the back of an elephant which was flown in from Africa to take him down the King's Road for a Sunday shopping spree. 'What are we meant to do if we can't buy the cream of international talent? We'd be reduced to bringing players through our youth system, working hard to improve the ones we've got, and engendering a genuine team spirit. I mean, no disrespect, but fuck all that.'
Abramovic added that attempting to succeed by 'things like training, tactics and sheer hard work' was 'all very well for these people like Stoke and Wigan', but 'not part of the Chelsea ethos'.
'We have a proud tradition of forking out £25m a time to parade international stars in front of our increasingly uninterested fans,' said the Russian, as his 100-strong entourage set about purchasing luxury goods on his behalf. 'We are not suddenly going to start playing by the same rules as everyone else.'
The vaguely-interested-in-football billionaire also dismissed rumours that Chelsea were investigated on three more charges of tapping up players, including 9-year-old Spanish prodigy Francisco Perez, whom they allegedly lured away from Seville by offering him several Nintendo Wii games and buying the borough of Kensington for the exclusive use of his family.
Posted by MWatson at 06:36