A-League chief: Oh, who are we kidding? 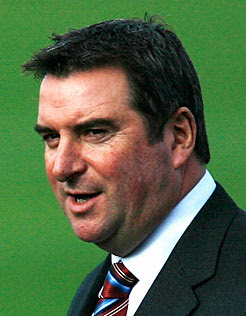 The future of Australia’s A-League looks bleak after competition chief Archie Fraser admitted in a TV interview that even he was having trouble following this season.

Australians have embraced the Socceroos and will willingly watch an international match. But the domestic game is generally ignored if there’s a game of footy (Rugby League), footy (Australian Rules Football) or footy (cricket) on.

Aside from the fierce competition for spectators, the A-League has been hindered by its quasi-erotic name, many poorly named teams with purple or orange kits and Robbie Fowler.

With six games of the new season played and crowds already dropping off, A-League boss Archie Fraser hasn’t helped to steady the ship.

“Look, I’ve not really been watching myself,” he roared at smirking journalists.

“It’s all Central Coast Mariners this and Gold Coast United that. One team from New Zealand just thrown in. Honestly, who cares? I just can’t get into it. I mean North Queensland, where even is that?”
Posted by Paul Watson at 04:52