Redknapp among suspects as transfer window is broken 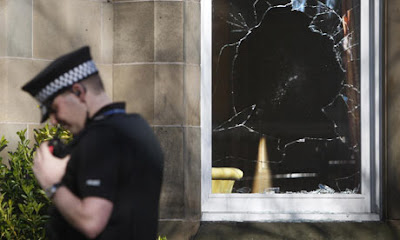 Police confirmed today that they are speaking to 'a number of Premier League managers' as they attempt to unravel the mystery of the transfer window, which was found shattered yesterday afternoon, plunging British football into chaos.
The window, which was closed for the autumn last week, prevents clubs from conducting transfer business for most of the season, after being introduced several seasons ago for reasons nobody really understands. Made of specially reinforced glass, its alleged magical powers - which include the ability to make players appear far more valuable than they are - had made it one of the most popular glass fittings in the modern game. But FA officials visiting Soho Square for a liquid lunch with FA Cup sponsors E.ON yesterday were shocked to find that it had been broken, seemingly by someone seeking to conduct an unauthorised deal.
'It's a sad day for the game,' said an FA spokesman. 'Without the transfer window, we're back in the Dark Ages of football when clubs could try to do deals at any time, just like in any other business in the world, rather than being constrained by an arbitrary limitation.' The spokesman promised that the perpetrator would be punished to 'the full, feeble extent of the FA's powers'. 'Any club found to have a connection with this incident could be fined up to £1,000 and forced to field a serious side in the Carling Cup.'
Suspicion has inevitably fallen upon Harry Redknapp, a popular theory among bloggers being that he inadvertently broke the glass while trying to force lanky centre-forward Roman Pavlyuchenko through it. But Redknapp, speaking to journalists at the dog track, denied any knowledge of the incident. 'The window? That thing's been dodgy for years, mate. Accident waiting to happen.'
Redknapp added: 'It was probably Benitez or one of them other foreign ones that done it.'