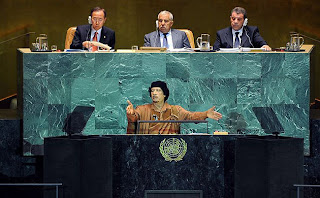 NEW YORK—In an hour-long address before assembled UN diplomats on Wednesday, Libyan leader Muammar al-Gadaffi called on the international community to come clean over years of alleged Jermaine Jenas.
“For years the United Nations has done nothing, despite repeated instances of Jenas”, claimed the eccentric premier, who seized power forty years ago in a coup d’etat.
“We are told there are secret documents that justify Jenas, but there can be no justification. He is not a defensive midfielder. He is not an attacking midfielder. He is nothing but an imperialist nonsense.”
After a rambling, twenty-minute digression that took in topics from the Iraq war to the versatility of shoe polish, Gaddafi resumed his denunciation of the Nottingham-born 26-year old. “This is Tottenham”, he said, arranging his microphone, water glass and the contents of his pockets into a rough 4-4-2 formation.
He then asked delegates if anyone present could explain the frequent outbreaks of Jenas, “the insidious spectre created by Israel, probably, to blight the rest of the world”.
Colonel Gadaffi has previously demanded a permanent seat for Libya on the UN Security Council, the abolition of Switzerland, and the reinstatement of Livingston into the Scottish First Division.
Jermaine Jenas has played in the English top flight for seven years, according to reliable sources, though he is best known for a brief appearance in the 2005 film ‘Goal’.
Posted by John Foster at 11:14