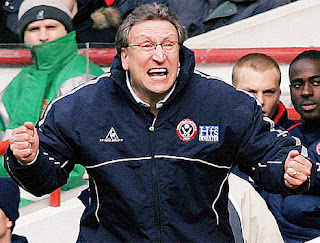 In a development that has fuelled rumours of a massive personal vendetta against him, Neil Warnock has accused FA chairman Lord Triesman of firing a harpoon into his car.
The temperamental Crystal Palace manager has seen his week go from bad to worse following a humiliating 4-0 home defeat to Scunthorpe United, which saw his side booed off by disgruntled fans.
Last week Sheffield United ‘keeper Paddy Kenny was given an eight-month ban from professional sport as punishment for openly associating with Warnock for a period of five years.
And earlier today the habitually seething 60-year old tactician was facing a hefty hike in his insurance premiums after a long spearlike implement was pulled from his vehicle. No-one was hurt, according to a Crystal Palace spokesman, though Warnock nemesis Triesman, 65, was caught on CCTV scurrying away from the scene in a suspicious manner.
“The rear left door of the Neilmobile has been wrecked by what appears to be a toggling harpoon,” said an Eagles press officer, referring to Warnock’s stricken Suzuki Liana. “This is yet another example of the FA’s 40-year campaign to victimise Neil for their own perverted entertainment.”
"Neil does not bear grudges for no reason at all”, the statement continued. “His tremulous fury is both reasonable and proportionate. The bloodless mandarins of Soho Square have only themselves to blame for incurring his wrath.”
Lord Triesman could not be reached for comment. An FA spokesman would neither confirm nor deny reports their chairman was injecting a containment of oranges bound for Selhurst Park with arsenic while sending abusive text messages to Warnock’s children.
Posted by John Foster at 11:23