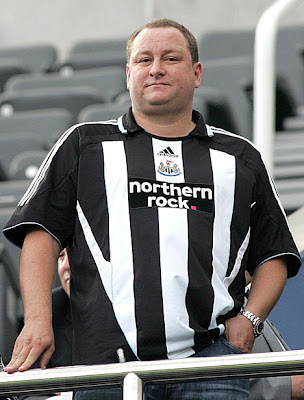 In the latest in a series of PR measures designed to win over hostile supporters of Newcastle United, millionaire owner Mike Ashley today unveiled a plan to urinate on a Newcastle shirt in the centre circle at half-time during Saturday's fixture with Peterborough United.
Ashley has inexplicably struggled to warm the hearts of the Toon Army since taking control of the club in 2007, despite a host of crowd-pleasing gestures, which have included saddling the club with crippling debts, installing unpopular managers and a pointless Director of Football, allowing folk hero Kevin Keegan to leave, and eventually steering a shambolic, demoralised outfit towards the Championship. Even his latest olive branch to the fans - proposing to sell the name of the hallowed, centuries-old St James' Park to the highest corporate bidder - has failed to generate the expected goodwill from the club's sizeable, disgruntled fan base.
At a press conference today, Ashley acknowledged that the Newcastle supporters have been 'a tougher nut to crack' than he imagined, but confidently predicted that Saturday's stunt will be 'the most popular yet'. 'I'm going to get the shirt worn by Alan Shearer in the 1997/8 season and wee on it in full view of the Gallowgate end. Then I'm going to go up in a crane and scrub Jackie Milburn's name off the Milburn Stand. And if all this goes well, I've got an encore planned where I do this song about Bobby Robson being illegitimate.'
'If all that doesn't finally please the fans,' concluded Ashley, 'I'm going to start to wonder if they have it in for me, or something.'
Posted by MWatson at 03:48