In light of Ferguson's complaints, Chelsea-Man U result amended to 0-0 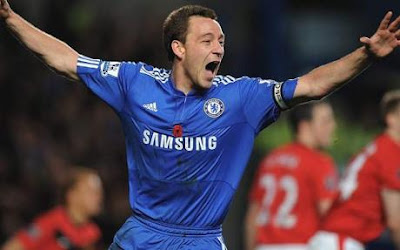 Sir Alex Ferguson's latest attack on a refereeing decision bore fruit today, as the Premier League agreed to disallow John Terry's controversial winning goal against his side, and change the score accordingly to a 0-0 draw, almost fifteen hours after the end of yesterday's match at Stamford Bridge.
Few in football took much notice yesterday evening when the claret-cheeked United boss launched his usual tirade against referee Martin Atkinson, claiming that Chelsea's winner should not have stood because it came from a contentious free-kick, Wes Brown was fouled in the move itself, the sun was in some of his defenders' eyes, it wasn't fair to make United come all the way to London on a Sunday, and football was a stupid game anyway. However, after hearing Ferguson's grievances on Five Live while driving home, Atkinson dramatically decided to change his decision and alter the match result.
'Really, if managers want us to reconsider the result of a game, all they have to do is ask,' Atkinson explained. 'I mean, it's obviously unusual, and it causes a bit of hassle to the guys who work out the league table, but if Mr Ferguson feels the goal should have been disallowed, then I'm sure he knows what he's talking about - after all, it was his team involved. He wouldn't just be pointlessly bitching and whining after the event; it's not like he's the most ungracious loser in the history of association football or anything.'
'We're obviously disappointed,' said Chelsea captain John Terry, who thought his goal had struck a huge blow to the Blues' title rivals, 'but in all fairness I wasn't sure it was a free-kick in the first place, so if he [Ferguson] had a clear view of it, then we might as well trust him. I'm glad he spoke out, because all the lads feel that the whole 90-minutes thing is very limiting, and it's nice to have the option of agreeing on a result the next day if something like this comes up.'
Both teams involved in yesterday's suddenly-goalless showdown will be bracing themselves for a renewed challenge from Liverpool, after it was rumoured this morning that Rafa Benitez had written to the referees of the Reds' games with Aston Villa, Sunderland, Fulham and Chelsea and was 'hopeful of claiming back at least seven points'.