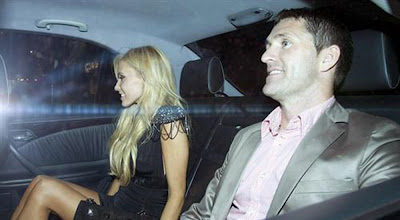 Republic of Ireland striking star Robbie Keane insists he had a "grand time" in Paris in spite of his side's heartbreaking World Cup 2010 qualification play-off defeat.
Hampered by the loss of their trademark luck, the Irish were denied a trip to South Africa by a William Gallas goal, scored after Thierry Henry had tossed the ball from hand to hand like a pizza chef flipping dough.
Amazingly, none of Henry's 19 handballs were seen by referee Martin Hansson and Robbie Keane's first-half goal proved insufficient to prevent despicable clown Raymond Domenech and his charmless underachievers reaching the finals.
But the disappointment at the Stade de France didn't seem to ruin culture buff Keane's enjoyment of the French capital.
"I had a terrific time," he beamed at bemused journalists. "On Tuesday night we went for a walk along the Seine and then had dinner at Les Deux Magots. Just to be in the same seats that the likes of Hemingway, Breton and Camus frequented was a humbling experience.
"And before the game we managed to squeeze in a visit to the Louvre and the Musee d'Orsay where I was lucky enough to get a chance to discuss the work of Edouard Vuillard with Guy Cogeval himself.
"Obviously the game didn't quite go as planned with the failure to qualify as a result of cheating and that, but still Paris was grand."
Manager Giovanni Trapattoni was also keen to stress that he "couldn't remember the last time he had been to Paris" and described the mid-week trip as "an unexpected joy at my age."
Posted by Paul Watson at 01:13