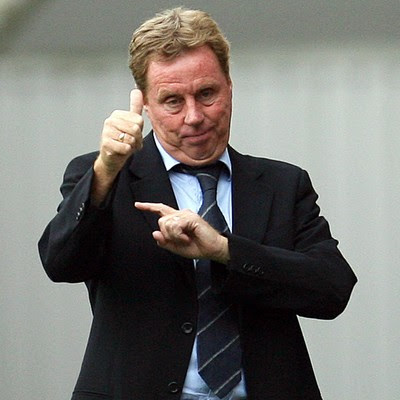 Master tactician Harry Redknapp was basking in the glory of Spurs's biggest win of recent times today, after his plan of scoring eight goals in the second half proved too much for his opposite number Roberto Martinez, who had instructed his Wigan players to score 'one goal, maximum'.
Spurs marksman Jermain Defoe, who bagged no fewer than five goals in Tottenham's amazing 9-1 romp, gave the credit to boss Redknapp for a tactically astute half-time team-talk. 'The gaffer noticed that we was only winning 1-0,' revealed Defoe, 'and he told us that obviously if we could get some more goals, it would be harder for Wigan to catch us up.'
'We was thinking maybe two or three, but the boss says to us: 'no, let's have a whole load of goals. Try and get eight. If you get eight, we'll have nine and that should easily be enough to win the game.' Some of the lads wasn't convinced it would work, but obviously, the scoreline speaks for itself.'
A spokesman told Back Of The Net that Redknapp was unavailable for comment today, having been called away to Monte Carlo to settle some debts, but an insider revealed: 'Harry came up with the plan a couple of weeks ago after the Arsenal game. He told the players to try and concede two or three goals in that game, and obviously the result was disappointing. So in the week following that, he got the calculator out and hit on the scheme of scoring a shitload of goals against Wigan.'
Redknapp's spokesman was understandably tight-lipped on the question of whether the Spurs boss would employ the successful tactic in their next game, against Aston Villa. But with rumours circulating that Villa supremo Martin O'Neill is instructing his own side to win 4-3, fans are bracing themselves for a classic.
Posted by MWatson at 10:39