Luck of the Irish ran out in 2003, officials discover 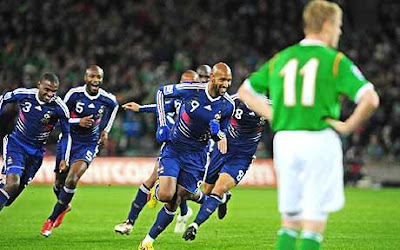 The famous 'Luck of the Irish', an unexplained cosmic loophole which traditionally allows the Republic of Ireland to overachieve at international football tournaments, expired several seasons ago, it was revealed today.

The Irish have enjoyed considerable success by invoking the rule, most famously when they used it to progress to the quarter-finals of the 1990 World Cup without winning a game in normal time, forcing a corner, or completing any passes. The LOTI also secured Ireland's passage to the knockout stages in 2002 after they had been outplayed by both Cameroon and Germany. It has been one of the most popular cliches for commentators sentimentalising Irishness, second only to constant mentions of 'pints of the black stuff flowing' every time the men in green lose by fewer than four goals.

This year, however, Ireland look set to miss out on qualification despite generally strong performances, thanks to a brutal draw which has pitted them against both Italy and France. After a fortunate deflected winner in Saturday's first leg with France left the Irish with a mountain to climb, FoI President David Blood launched an informal inquiry. He discovered, according to insiders at Croke Park, that the Luck of the Irish was not renewed in time for Euro 2004, and has been discontinued. 'We wondered what had happened to all those scrambled goals from dubious corners, and qualifying groups full of joke teams like the Faroe Islands,' Blood lamented. 'Turns out
we no longer have our ancient right to skank our way through competitions with functional set-plays.'
'Feck!' added Blood.

It has not yet been established why the Luck of the Irish was rescinded. One theory suggests that the Irish gods were upset by the appointment of non-Irishman Mick McCarthy as manager, but this seems unlikely to have been the cause, as the 1990 World Cup squad was famously managed by an Englishman and contained as many as eight players who had never been to, or heard of, Ireland. Others think the LOTI may have been transferred to Ireland's rugby team, who won the Grand Slam this year after Wales's Stephen Jones missed a decisive last-second penalty.

'But to be honest,' Blood admitted, 'we might have just forgotten to send the forms back after the party to welcome back the 2002 heroes [from South Korea, where Ireland reached the last sixteen]. Now, there was a grand night with some great craic.'

This is not the first blow to Irish heritage in recent years. The legendary Blarney Stone famously lost its magical powers after being urinated on by members of an English stag party, and the nation's official nickname was changed to 'The Emirates Emerald Isle' after a sponsorship deal in 2007. But Blood promised fans that 'whatever happens in Paris, win, lose or draw, the black stuff will be flowing back home.'