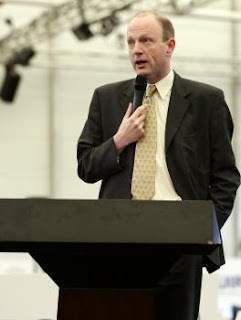 The chairman of Northwich Victoria’s Supporters Club has admitted that, like much of the nation, he spent the last 10 minutes of the FA Cup win over Charlton half hoping for an equaliser to prevent a flurry of clichés from exasperating ITV commentator Peter Drury.

For the first time in recorded history, a non-league side triumphed over a league side in an FA Cup tie as Northwich Victoria – a team made up of plumbers, taxi drivers and semi-professional footballers – harnessed the mystical magic of the cup to book a place in the second round.

While the exact nature of the magic of the cup is a closely-guarded secret, only available to members of the magic circle and plucky non-league sides, it is believed to be a trick of misdirection involving a boggy old pitch, a small crowd of frenzied yokels, a freezing afternoon in early winter and a plentiful supply of fate-tempting.

Always ready to take the side of the underdog, viewers across the country cheered on Northwich during their televised triumph, but their heroics were sadly soured by the pre-arranged, pretentious babblings of insufferable wordbag Peter Drury.

Drury spent the first 75 minutes of the contest stressing his incredulity that the people of Northwich were able to function as human beings and that the Conference North side had managed to “dress properly for the game with socks and boots and all”.

But after the minnows took the lead, Drury shifted up a gear and began to speak almost entirely in verse, summarising events in hyperbolic dactylic hexameter.

Having stressed that the FA Cup was “doing its thing”, Drury then proceeded to run through a dizzying medley of Cup clichés, which built to the bone-chilling crescendo of “Teenage kicks! Northwich victorious!”

“This is a fantastic, historic day for my club,” Northwich nut Peter Barton enthused.

“However, I have to admit that I was kind of hoping Charlton would equalise to take the wind out of Drury’s sails. We could all hear him from the terraces and he was putting off some of the players with his unconscionable boobery.

“I’m looking forward to the second round and Lincoln but if it’s televised it might be for the best if we lose 2-0 or 3-0.”