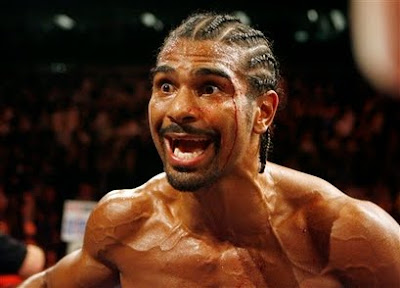 Tottenham striker Peter Crouch is among a group of Premier League footballers fearing for their lives, it was revealed today, as new WBA Heavyweight World Champion David Haye - fresh from his conquest of 7ft 2in Nikolai Valuev - seeks the next victim in his devastating spree of lofty-people-punching.
Haye, now among the hottest property in the sport, was widely expected to tackle American John Ruiz next, eventually moving on to veteran brothers Wladimir and Vitali Klitschko. But in a typically outspoken press conference yesterday the London-born slugger announced that he 'can't wait that long to hit another tall bastard' and 'has his people on the lookout for a lanky streak of piss to knock around'.
'I hate people taller than me,' roared Haye, who was picked up by TV cameras screaming 'fucking beanpole!' as he went toe-to-toe with his Russian opponent on Saturday. 'I hate the way they can reach things down from shelves and they're always standing in front of me at Glastonbury. And I hate the way they always get a flick-on when a corner comes over, and are surprisingly good with the ball on the deck.'
This final comment seemed squarely aimed at Crouch, and the Met Police put the England target man under protection when an eye-witness report claimed that Haye had been seen in the vicinity of White Hart Lane, studying the Spurs squad through binoculars and muttering 'look at the bloody size of him'.
Other players over six foot three - Haye's own height - have been also advised to remain vigilant, with Zat Knight and Kanu among those put at risk by Haye's irrational hatred of the tall. Sunderland keeper Marlon Fulop was allegedly also lined up by Haye's management, but does not have the necessary profile to attract the estimated $120 million purse necessary for the boxer to 'totally beat the crap out of some great big lump'.
Posted by MWatson at 06:42