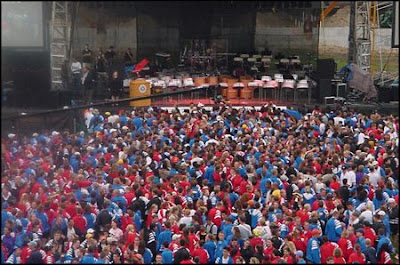 Sergi Moreno and Fernando Silva, the two Andorra players to cross the halfway line in last night’s World Cup 2010 qualifier against England, have been given a tickertape reception on their return to Andorra la Vella.

There have been calls for the introduction of a pre-qualification tournament for the likes of Andorra, San Marino and the Faroe Islands and FIFA have approved the use of a two-goal headstart for ‘genuinely shit nations’.

But it seems that Andorrans were proud of their side’s gutsy effort on English soil.

Although statistics show that all 11 of Andorra’s players spent at least 90 per cent of the game in their own box and goalkeeper Koldo Alvarez spent the second half standing inside the net hugging himself and muttering ‘please let it be over’, the Andorran people have focused on the men who did briefly venture into the England half.

Sergi Moreno and Fernando Silva returned home late last night to a hero’s welcome and regaled the crowds with tales of their adventures.

“People say that there is no sense in geographical anomalies like Andorra taking part in World Cup qualification but the spirit shown by Moreno and Silva has proved them wrong,” Head of Government Jaume Bartumeu declared.

“Obviously they would’ve been more wrong had we scored, but let’s face it that’s never going to happen.”