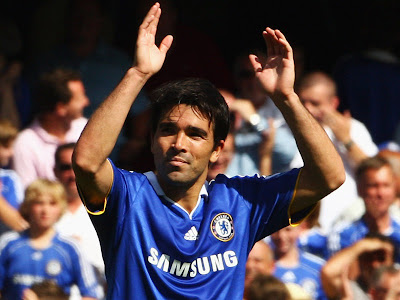 One of the mysteries of the 08-09 season was explained last night when Chelsea officials admitted that 'Deco' - supposedly signed for £8 million at the beginning of the year, only to disappear almost completely from the public eye - actually never existed.
'There never was any such person,' read a statement drafted on behalf of Roman Abramovich. 'We made him up so fans would believe we were signing a big star. In reality there was no-one we really wanted last summer, but the club's supporters would be disappointed if we didn't throw money at a rash signing, especially in an area where we already had more than enough talent. And so the idea of a player called 'Deco' was born.'
After being unveiled with the usual fanfare, Deco mystified the football world by disappearing almost totally from the Stamford Bridge outfit for most of the year. He made a smattering of appearances under hapless boss Luiz Felipe Scolari, before vanishing altogether in the reign of Guus Hiddink. Now that Hiddink has himself been replaced by a man with the same face, Chelsea have taken advantage of the clean slate to admit that footage of 'Deco' apparently scoring goals for Barcelona was 'created by computer simulation' - the work of 'the same guys who do Pro Evo'. 'It looked really fucking cool,' the press release remarked.
On the few occasions that 'Deco' did take the field in a Chelsea shirt, he was played by an actor: diminutive film-star Tom Cruise, who was paid a reported $11 million per game. This relevation clears up the mystery of why the much-hyped playmaker barely touched the ball in many of his outings for the Blues. 'We had to ask Tom not to get involved in the play too much,' confirmed one of the eight movement directors who worked with the fake Deco, 'or he would've been found out pretty quickly. There was a hairy moment when he appealed for a penalty in what was clearly an American accent, but apart from that, no-one suspected a thing. Luckily, Chelsea fans tend to nod off a bit during games.'
In another press statement issued yesterday, the Blues confirmed that they were close to sealing a thirty-million-pound move for Brazilian midfielder Pozzo. Although little-known outside Brazil, club sources say that the 18-year-old is 'really something special'.
Posted by MWatson at 03:11