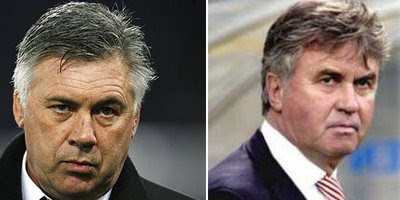 FA Cup winners Chelsea have issued a statement stressing they are "fairly sure" they have replaced caretaker manager Guus Hiddink with Carlo Ancelotti.
Jolly Dutchman Hiddink's tenure came to an end last weekend with FA Cup glory and the club have opted to stick with the winning formula by bringing in a man with exactly the same face.
In a press release this morning, Blues owner Roman Abramovic welcomed Ancelotti to Stamford Bridge but later admitted there was a "very real possibility" it was just Hiddink doing a different voice.
The club have confirmed that for now Ancelotti will be given Hiddink's security passes and training tops "to save on paperwork and that."