Shrewsbury's Michael Jackson: At Last The Jokes Are Over 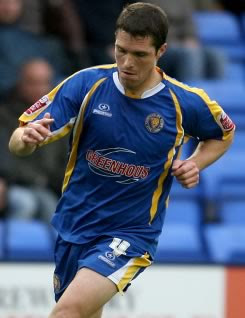 While most of the world mourned the death of King of Pop Michael Jackson yesterday, there was relief for the Shrewsbury central defender whose life has basically been ruined by having the same name. As tributes poured in from A-list celebrities in every corner of the globe, there was one dissenting voice - that of the former Bury and Preston veteran. 'I know it's kind of a tragedy, but obviously I'm delighted, in all honesty,' said the less-well-known Jackson, who has heard, on average, eleven jokes about his name every fucking day of his life since 1982. 'It's been a long twenty-seven years since Thriller came out.'
'Opposing fans singing about kiddy-fiddling. The [Bury] lads asking me where my chimp was. Even the guy in the bank glancing at my credit card and cracking up, going 'gutted, gutted'. You name it. I've had it.'
'So when the gaffer [Paul Simpson] texted me to say Jackson was dead, I actually punched the air in the middle of Wetherspoon's. At last people will know who the real Michael Jackson is. This is huge for me.'
'I've lived in his shadow for too long. Sure, he did some good songs, but I've made more than 400 league appearances. He played some big gigs, but did he have a League One Play-Off Final winner's medal?'
'Well, now he's dead. Thank Christ.'
After this, Jackson wrapped up the press conference in order to get in touch with his family, who had gone into mourning after hearing the news from L.A.
Posted by MWatson at 06:47