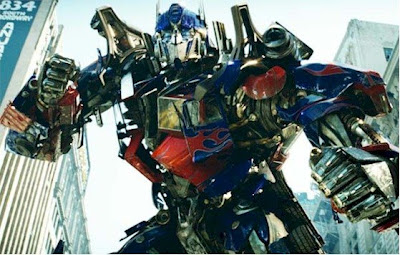 From our American Correspondent

David Beckham was in hiding in the hills above Los Angeles tonight after his employers, L.A. Galaxy, responded to fans' disgruntlement at his patchy appearance by dispatching the full might of Hollywood on a deadly revenge mission against the deadball genius and underwear model.
Hundreds of CGI-generated monsters, robots, orcs and miscellaneous supervillains pursued Beckham - who caused fury by moving to AC Milan because the American league isn't a real league - promising Galaxy supporters 'a banquet of blood' in their 18-rated quest.
LA Galaxy owner Philip Anschutz, squinting at the scene through a special pair of glasses made from solid gold, said: 'Beckham seems to think the US is some kind of joke country where we don't know how to distinguish soccer from our many other glossy forms of entertainment. He thinks we aren't serious about the game and the whole MLS is a kind of showy, soulless publicity circus. Well, guess what! We're going to hunt his ass! We're going to bring him back here to the Home Depot Center [Galaxy's showy, soulless stadium]! And we are going to show him the United Status doesn't like being weighed up against a country with a vastly superior soccer heritage!'
Anschutz added that the avenging army's battle with Beckham will appear on cinema screens shortly. 'THIS FALL, ONE MAN WILL TAKE ON THE ODDS,' he bellowed.
Optimus Prime, the leading Transformer who is one of the figureheads in Galaxy's $560 million war on Beckham, commented: 'No sacrifice is too great in pursuit of freedom. However, Beckham should not have had the freedom to stay in Italy beyond the original terms of his contract. He must die.'
As the conflict entered its fiftieth hour, with an eerie darkness settling over the landscape, Beckham was nowhere to be seen tonight, although his wife Victoria was spotted fleeing by outsiders, who said that she looked 'tired, ill and pissed off. Exactly the same as usual.'