Crouch's Purchasers Unsure How To Assemble Him 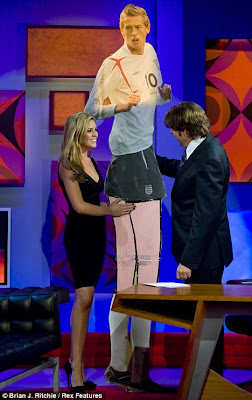 After announcing the £10m signing of Peter Crouch this morning, Tottenham admitted several hours later that they were 'still struggling' to put together the flat-packed striker, who was delivered in seven pieces from Fratton Park once negotiations had been completed last night.
'How the hell are you meant to...' a baffled Harry Redknapp asked reporters, studying an incomprehensible set of instructions scribbled down by Crouch's previous owner, Pompey boss Paul Hart. 'He said it went up in ten minutes,' Redknapp lamented, shaking his head in despair, half-an-hour later. 'Ten minutes! If this is ten minutes, I've never been investigated by the FA!'
At eleven feet tall, Crouch is an impractical size for most homes, but his wide range of functions - including heading, knock-downs, WAG-shagging, and briefly-amusing-dance-inventing - attracted Redknapp, who had been looking for a target man to spearhead Spurs' campaign for 10th place next season. 'He looked great in the catalogue,' said Redknapp, his face even redder than usual, 'but look at all these bits here. I mean, you need a degree in bloody engineering!' The permanently tired-looking boss was later said to be looking into the possibility of purchasing a degree in engineering online.
Crouch - manufactured by a team of German automobile technicians as a by-product of a secret experiment in the seventies - was unable to comment as he was still in pieces on the floor. He has previously played for (among others) Aston Villa, Southampton, and Liverpool, where he was out of action for three months after Sami Hyypia took him home to show the kids and lost the remote control.