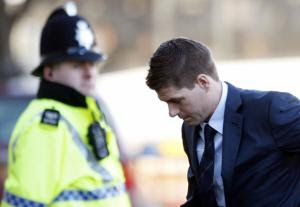 Merseyside Police say that CCTV footage released today of the brawl at the Lounge Inn in Southport last December, which led to the arrest of Liverpool skipper Steven Gerrard, shows 'Mr Gerrard, although provoked, behaved in a disorderly and violent manner', and also that 'this was yet another occasion on which Liverpool players narrowly failed to turn a great position into glory.'

The Reds, whose season was marred by a string of draws, enjoyed a huge advantage at the halfway stage of the fight, but Marcus McGee and his mates - opponents who, Gerrard admitted, 'we would expect to beat nine times out of ten' - came back strongly to force a stalemate and leave them rueing lost points. 'It does seem to be a problem that we're not able to finish the job,' said Gerrard, who landed one punch but narrowly missed with two more, and watched in frustration as teammate Dirk Kuyt swung his fist wide of McGee from barely five yards away.

It was the fourth time in a row that Rafa Benitez's players had failed to win a fight on home territory. 'It's been our form on Merseyside that's let us down,' Gerrard lamented. 'Away from home we've been excellent, Steve [Finnan] has decked that fella in the club in Soho, and we were excellent in Porto thanks to Yossi [Benayoun, who urinated on a display of local artwork and called three women whores]... but in front of our own constabulary we just don't seem to be taking our chances.'

Asked why Robbie Keane and Xavi Alonso had been left out of the fight altogether - Keane, although fit, being made to accompany the reserves to a cheaper nightclub in Huyton - Gerrard said that team selection was 'a matter for the manager'. But Benitez was in no mood for questions when approached last night in his Anfield bunker, where is working on paranoid rants for next season. 'We are going to the right clubs and fighting well but not winning the fights,' said Benitez. 'I don't know why it is. We are unlucky. Nobody asks why Manchester United or Chelsea doesn't win a fight but if it is Liverpool, everyone is asking.'

'We will be stronger next season and I am confident we can be champions,' added Benitez, who has finished every press conference with these words since he took over in 2004.