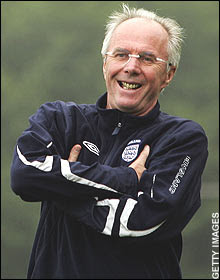 The Football Association installed international coach Sven-Goran Eriksson as Director of Football at lower-league strugglers Notts County today, as part of a new campaign to restore interest in football by making loads of crazy shit happen.

A statement issued by the FA at lunchtime read: 'Let's face it, English club football has become pretty stagnant. Only three clubs can compete for the title, and one of them (Liverpool) never actually win it. Mediocre imports are squeezing local talent out of the picture at every turn. Many of our once-great clubs are now in the hands of faceless foreign investors, who bankroll mass migrations of mercenary professionals. The Premier League giants are showing less and less regard for cup competitions and traditions, for the overall health of the game, even for their own fans.'
'With all this in mind, the FA is proud to announce that 2009-10 will be the first ever Season of Crazy Shit'.

The spokesman then set off a series of Party Poppers before leaving on a unicycle.
Eriksson, famous for managing England to a series of quarter-final defeats, fucking Ulrika Jonsson even though you could never imagine it looking at the two of them, and being followed everywhere by a man called Tord Grip, said he was 'delighted' to move to Notts County to launch the FA's new programme of absurdities. 'I love to do funny things and maybe sometimes things which are a little crazy,' said the Swede. 'For sure, Nottingham is a dreadful place to live but this, of course, only makes the joke rather funnier.'
Speculation is now rife as to the FA's next plan. Although nothing has been confirmed yet, a document leaked to selected journalists hinted strongly that Cilla Black is poised to replace Martin O'Neill as Aston Villa boss, two teams have being approached to conjure up a 9-9 draw on the first day of the season, and Everton are planning to score their first ever goal not to come from a scrappy set-piece.
With football suddenly a funny old game again, Saint and Greavsie are rumoured to be planning a dramatic comeback. 'I tell you what, either football's gone mad, or I have,' said noted soccer funnyman Greaves from his London home. Ian 'Saint' St John was too busy laughing at Greavsie's remark to make any further comment.