Pearson's Press Statement 'Officially Most Boring Of All Time' 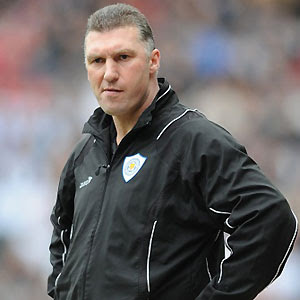 Leicester manager Nigel Pearson has broken the world record for the most boring statement ever given to journalists, it was confirmed today. Experts emerged from a 10-hour emergency analysis of Pearson's remarks on possible signing Leroy Lita to publish their verdict this morning. The panel unanimously agreed that the comments 'did not contain a single word which was not a cliche' and were 'staggeringly dull'.
Speaking to BBC Radio Leicester about the Foxes' pursuit of big-headed talent Lita, Pearson said: 'We will see what happens. I know there's a lot of speculation about him [Lita] but I wouldn't like to make any comment at the moment. If we can improve we will but at the moment I can't really elaborate on that. I won't bring players in for the sake of bringing players in.'
Within minutes, the statement had been referred to the panel, who scanned it extensively to see if a single meaningful word could be found in it. When their search was unsuccessful, the scientists concluded that Pearson had 'set a new bar for managers talking pointless crap'. Pearson's record breaks that set in 2007 by Bryan Robson, who said after his Sheffield United side had drawn with Plymouth: 'we've started the game well and they've come back into it and in the end I think a point each is about right.'
Leicester chairman Milan Mandaric said he was 'delighted' Pearson - who won promotion at the first attempt after taking over from certified lunatic Ian Holloway - was continuing to put the Midlands club back on the map, and there is' no chance of him being sacked for five or six weeks at least.'
Posted by MWatson at 03:03