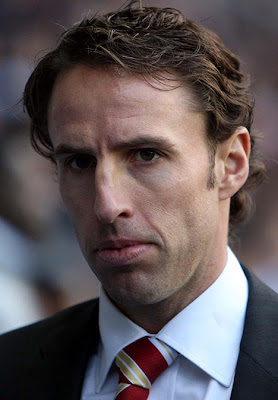 Part-time Middlesbrough striker Mido, who has missed the first two weeks of pre-season training with the club he occasionally plays for, responded to criticism of his latest bout of absenteeism today, claiming that he 'set off ages ago' but 'must have put the wrong postcode into this bloody sat-nav'.

As mild-mannered boss Gareth Southgate prepared what he called a 'stiffly worded text message' to the disappearing star, Mido phoned in to say that he'd 'not allowed for there being so much traffic between Egypt and Middlesbrough' but would 'be there in a jiffy, definitely by Christmas.'

Southgate has endured a difficult summer as he attempts to rebuild for the Championship campaign. He was forced to sell star asset Stewart Downing, who won his 23-year battle to leave Boro last week; discovered that Boro would play all their games at Plymouth next season; and underwent surgery to coax his face out of the philosophical pout of gentle disappointment in which it spent the entire period from September to May. 'Mido is pushing his luck here,' said a source close to Southgate. 'You don't want to see Gareth when he's angry. You've never seen anyone tut and shake their head so much.'
It's not the first time that Mido has made headlines by not turning up; in fact, the Egyptian troublemaker has missed almost three-quarters of his own career. While on loan to Wigan last season, he infuriated manager Steve Bruce, skipping a trip to Fulham because he 'wasn't feeling right in himself', disappearing to the shops between the ninth and eighty-fourth minutes of the visit to Sunderland, and famously sending pop star Dido to Arsenal in his place. Boro signed Mido from Tottenham for £6 million in 2007, after a medical check concluded that he was 'in perfect health and fitness, but a serious prick.'