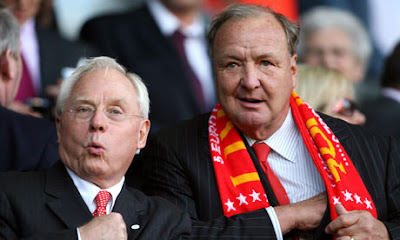 As press reports suggested that they were in danger of saddling Liverpool with enormous, crippling debts, the club's American owners Tom Hicks and George Gillett were in bullish mood today, announcing that they were 'confident of raising the cash' to meet the estimated 42-million-pound shortfall, thanks to a huge eBay clearout of stuff they had lying around back home in Texas.

'Sixty million bucks sure sounds like a lot of money,' said a defiant Gillett, 'but you wait to see what I'm bid for my life-size Elvis Presley mannequin. The reserve price is $200.' Hicks, meanwhile, is pinning most of his hopes on the entire Tony Hawk's Pro Skater series for PlayStation 2, which he is selling for $15 a game or fifty for the lot. 'Even the older ones, like Tony Hawk's Pro Skater 2, are still heaps of fun to play,' Hicks reassured potential bidders at a press conference. 'They'd make a great gift.'

Many Liverpool fans were concerned in 2008 when the American pair bought a majority shareholding in the club, worrying that one of football's traditional powerhouses was in danger of becoming a plaything for a pair of wheeler-dealers with little respect for its history or traditions. Hicks sought to ease such fears yesterday, reassuring fans that Liverpool would not be left to pay for the Americans' excesses. 'Hell, no. If anything, the club stands to make a profit.' When asked how this could possibly the case, Hicks put his fingers in his ears and whistled America The Beautiful while Gillett gave reporters details of the eBay link for a Chinese lamp which he hopes to offload for 'somewhere near $100'.

At the time of going to press, the pair's eBay fire sale had raised only $3.50 plus postage of the required $60 million.

When it was put to Gillett that he and Hicks were a couple of poisonous dickheads who had irresponsibly toyed with a club dear to the hearts of millions, that they had little discernible interest in football or affection for its followers, and that they really ought to fuck off at the earliest possible opportunity, Hicks grinned goofily and said 'I guess so. Dang!'
Posted by MWatson at 05:48