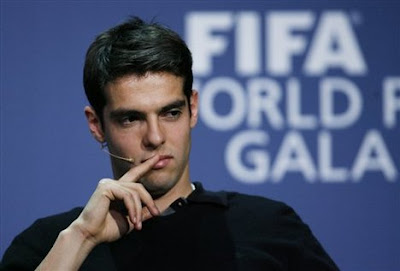 Kaka has shattered the world transfer record with a £56m switch from Milan to Real Madrid, but the deal has been overshadowed by an explosive anti-Manchester City tirade in this morning’s press conference.

After months of speculation, the pious playmaker ended a six-year residency at San Siro and completed the Real Madrid move that has been reported weekly in the Spanish Press since 2006.

However, Kaka was uncharacteristically fiery in the press room at the Bernabeu and opted to dwell on Manchester City’s unsuccessful £100m bid in January.

“It’s nice to sign for Real,” he said. “Especially because that will stop all this bullshit about Manchester City.

“Manchester City? Seriously, can you imagine me, Kaka, playing alongside Nigel De Jong and Vincent Kompany. Of course you fucking can’t, I’m Kaka that’s why.

“I just felt embarrassed about the whole thing. The entire Milan team were pissing themselves when that oval-headed goon Gary Cook turned up with his piggy bank. I just wanted the ground to open up and swallow me.”

After another 15 minutes of anti-Man City sentiment and a derogatory farted version of ‘Blue Moon’, Kaka wrapped up his press conference by taking aim at celebrity City fans Oasis.

“I don’t even like Oasis. Granted, ‘Definitely Maybe’ was pretty good and ‘(What’s the Story) Morning Glory’ was a defining album of the 1990s, but even then a lot of the songs were a little self-indulgent and ended up at around six minutes when four would have sufficed,” he roared. “So, in summary, delighted to join Real."