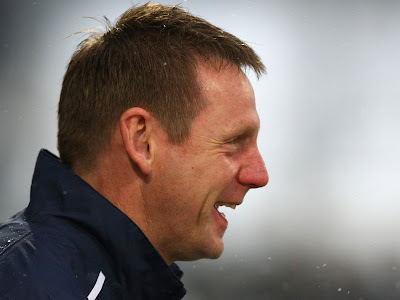 England under-21 coach Stuart Pearce admitted today that it was a mistake to tell his squad they were 'already winners, whatever happens' before their Final with Germany, after the players took him literally and prepared for the big match by drinking, negotiating endorsement deals, and staging a huge karaoke party on PlayStation game SingStar, which culminated in Michael Mancienne and Jack Rodwell performing a version of '(Everybody Was) Kung Fu Fightin' - complete with dance moves - just twenty minutes before they took to the field.
Pearce had made the 'you are already winners' speech after watching his side dramatically overcome Sweden on penalties in the semi-final, ending years of penalty misery for England. However, as the rueful boss told a press conference, 'the lads have taken it much too literally. I've said it very much as a football cliche, but obviously the boys haven't played in a major tournament before and they've taken it to mean they should let their foot off the gas. In all honesty half of them was three sheets to the wind by kick-off, and James [Milner] in particular's really gone for the vodka fountain.'
His counterpart Horst Hrubesch, by contrast, had prepared the German side for the game by telling them directly after victory in the semi-final that 'defeat would be an unthinkable crime, and would cost us our homes and lives'. The Germans won 4-0, the all-important second goal something of a gift from England keeper Scott Loach, who was using his BlackBerry to order party poppers at the time.
Posted by MWatson at 12:16