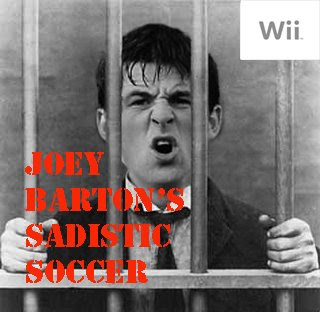 Kamikaze crisis club Newcastle United are aiming to deflect criticism for the financially devastating purchase of jailbird midfielder Joey Barton’s image rights with the release of a Nintendo Wii game based on Barton’s life.

As gelatinous simpleton Mike Ashley attempts to sell Newcastle for £100m, it has emerged that the Championship newcomers are paying psychotic waste of space Barton just under £700,000 per year for the right to use his image.

While United have made a reasonable profit from their ‘Barton Behind Bars’ merchandise range, they are looking to claw back more cash with the release of ‘Joey Barton’s Sadistic Soccer.’

“It’s the first game of its kind in that it allows you to see what it’s like to juggle the twin demands of being a top-level footballer and a despicable piece of shit,” game designer Michael Sapsford declared at the game’s launch.

“Of course you get to play in a few games of football and occasional training sessions, but the main action comes off the pitch – do you burn a teammate’s retina with a cigar? Do you punch a man in the face 20 times outside McDonalds? These are the real choices and on the Wii platform you’ll think you really are beating the shit out of Ousmane Dabo or racially abusing Gabriel Agbonlahor.”

Parent support groups have voiced concerns that ‘Sadistic Soccer’ will set a bad example to younger children, but Sapsford is unapologetic.

“If anything this will help kids see the sacrifices that need to be made if you want to earn £60,000 per week,” he stressed. “But I suppose anyone who wants something a little softer can always buy one of our other new releases like ‘Michael Owen’s Injury Nightmare’ or ‘Harry Redknapp’s Questionably Motivated Transfer Challenge.’”