Benitez Already Working On Paranoid Rants For Next Season 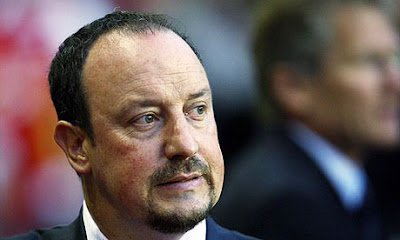 While other managers enjoy a much-needed break after the graft of a long season, sources close to Liverpool boss Rafa Benitez reveal that the Spaniard - hell-bent on ending the Anfield club's long spell without a Premier League title - is still putting in long shifts in his office, penning some of the bizarre rants with which he will attempt to explain the Reds' mid-season meltdown in around March 2010.

Benitez, whose Liverpool side flirted with top spot last year, appeared to lose his mental composure as they fell behind Manchester United, conducting a series of odd press conferences in which he made apparently meaningless references to 'things which were happening' behind the scenes at the club, and made unsuccessful attempts to undermine red-faced rival Sir Alex Ferguson. But according to friends, those ramblings were 'nothing' compared with 'some of the shit Rafa has lined up for next season'.
Although they were reluctant to divulge details, the sources enthused that Benitez's forthcoming rants included 'some of his best stuff yet'. 'He's really happy with it,' said one Anfield insider. 'There's one where he blames a home draw on a person who isn't even born yet. And he's considering trying to pin a couple of defeats on the Vatican. He's going to re-use some of last season's stuff as well, though, like repeatedly demanding 'respect' from everyone.'
The interviewee, who did not want to named, told journalists that Benitez 'had not definitely decided' how exactly Liverpool would blow the title next season, but speculated that 'he's done the whole drawing-with-Stoke thing now, so I reckon next year they'll go back to losing a load of away games around Christmas.' Earlier this week a private to-do list, on a leaked e-mail from Benitez's office, included items like 'sign Glen Johnson for ludicrous, unjustifiable fee' and 'get distracted by pointless Carling Cup run'.
Posted by MWatson at 09:36