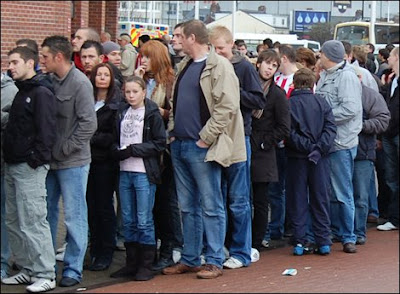 League clubs across the country were picking up the pieces yesterday after the announcement of the draw for the first round of the Carling Cup provoked what officials described as 'an insane, sometimes violent struggle for tickets'. With most games sold out within an hour of the announcement, staff were left to deal with scores of furious punters, some of whom had queued outside grounds for up to 72 hours as the annual outbreak of Carling Cup fever struck the land once more.

A taskforce of special police at Cheltenham's Whaddon Road stadium had to use tear-gas to dispel a crowd of more than 5,000 fans desperate to see the tie with Southend, while at Nottingham Forest's City Ground, thirteen people were hospitalised after a brawl over the last ticket for Forest's plumb tie with Bradford. 'We knew there'd be mayhem as soon as Bradford came out of the hat,' said Forest chairman Nigel Doughty, as ambulance crews cleared a path behind him. 'The Carling Cup always causes these sort of scenes. What can you do? It's the second or third-biggest knockout cup competition of the season.'

At Sincil Bank, Lincoln, where fifty new ticket booths had to be opened to cope with demand for the clash with Barnsley, a blood-covered steward explained: 'The Carling Cup seems to turn people into animals. They know that if they get past this round, they've a chance of playing one of the big boys. Except the ones who get a bye to the third round. And even then, half of them only field their reserve sides. But still.'

Marjorie Vickers, a Huddersfield fan, had been camping outside the Galpharm Stadium for four nights and four days before finally laying hands on two tickets to the Huddersfield-Stockport showdown. 'It was a bit cold and we had to go into McDonald's every morning to wash in their sinks,' said Vickers, 46, 'but it's all been worth it. You can't miss a game like this, there's no knowing when Stockport will be here again. Apart from when we play them in the league, I suppose.'

The eagerly-awaited Cup kicks off on August 11th, and will be won in February by Manchester United again.