New West Ham Owners Promise 'We'll Be As Mediocre As Ever' 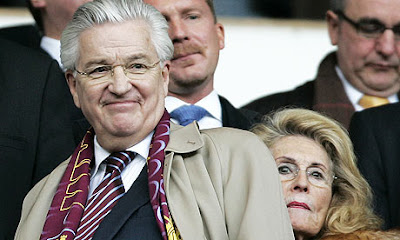 After a turbulent week at Upton Park, CB Holdings - the corporation that has bought West Ham United - took steps to reassure fans yesterday that the backroom dramas would 'make no difference' to the club's 'commitment to not achieving much in particular'.

There were fears that the departure of Icelandic tycoon Bjorgolfur Gudmundsson might cause unrest at the club, which has enjoyed a steady period since famously cheating its way out of relegation in 2006/7. But the chairman of CB Holdings stressed: 'West Ham fans are justifiably proud of normally finishing about tenth and getting to about the Fifth Round of the FA Cup, and we can promise them that the coming season will be as unspectacular as ever. The new board will make all possible funds available for Gianfranco Zola to steer the squad to another underwhelming mid-table finish.'

The spokesman added: 'At least, that's what it says here. None of us will be going to any of the games, I don't think. We're not really into football.'

Zola told press that he was 'pleased another faceless paymaster has been temporarily installed' and announced that he has already drawn up a plan for the season which involves 'wins over the likes of Wigan and Bolton' and 'plucky defeats by the top four'.

Despite these reassurances, some West Ham fans remain unconvinced. Alan Rowlands, head of Hammers Independent Supporters Club, said: 'West Ham fans are very angry about the way the club's finances have been handled. Mind you, we're also angry about Lampard leaving, Joe Cole leaving, Michael Carrick leaving, the existence of Chelsea in general, Paul Ince leaving even though half of us can't even remember it, and we're pre-emptively angry about most of our home performances next season. So it does get a bit tiring.'
Posted by MWatson at 02:39