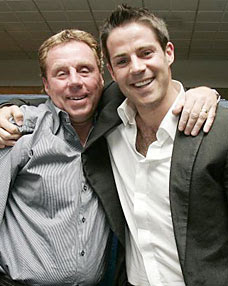 Tottenham boss Harry Redknapp was at the centre of more questions about his transfer dealings this morning, when it emerged that his first high-profile capture of the summer would be Jamie Redknapp, his son, who is heading to White Hart Lane in a deal worth a reported £40 million. The transfer fee, one of the biggest in football history, has raised some eyebrows among commentators, not least because Redknapp does not currently play for any club, having retired in 2004-5 to concentrate on advertisements and laboured punditry. But Redknapp Sr. says there is 'nothing irregular' about the deal, mediated by agent Mark Redknapp, which will see the eight-figure sum paid directly by Spurs to Louise Nurding, Redknapp's wife. 'It was just convenient to do it that way,' said Redknapp, 'with us all having each other's numbers and that. Is this interview going to take long? I've got a couple of people to see down the Old Kent Road.'

When asked what he felt the retired Jamie could add to Spurs' midfield, Redknapp Sr. briefly looked even more tired than usual, his eyes disappearing altogether for more than ten seconds. 'He's just a tricky little player who can make things happen for you.' When it was put to him that Redknapp had not played at any level for three years, having been forced out of the game by a recurrence of some of the 3,405 injuries which plagued him throughout his career, the Spurs supremo fudged the question, muttering that Jamie had 'actually been playing for Wigan' since 2005: a claim which could not be countered as nobody could recall watching a Wigan game.

Jamie Redknapp was also evasive on the subject of the landmark transfer, saying: 'I'm not even joking, mate. You fuckers pay up the full amount by Monday or my old man's going to have one or two things to say, put it that way. What? Oh, sorry, I thought you was the boys from Nintendo.'

It's not the first time the man known to football fans simply as 'Harry', and to tax inspectors by a host of other names, has been subjected to scrutiny over his machinations in the transfer market. While at West Ham he attracted criticism for the mysterious signing of Marco Boogers, who made only two appearances for the Hammers, and in 2007-8 he was investigated by the FA after his wife Sandra joined Portsmouth as a right-winger on a £70,000-a-week contract.
Posted by MWatson at 04:45