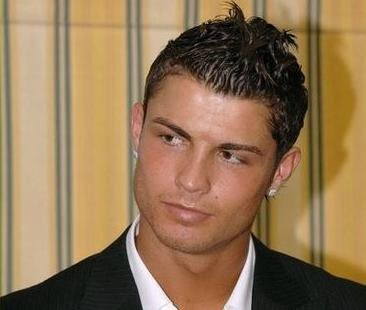 After more than fifteen years of tedious speculation, bloated superpower Real Madrid announced today that they are signing arrogant playmaker Christiano Ronaldo for a sum of money which would feed most of the developing world.

Los Galacticos, fresh from parting with a stupid world record fee to secure the services of tiny marksman Kaka, offered an even more heinous £80 million pounds to clinch the signature of the PFA Player Of The Year, pictured here with one of his many shit haircuts. Although like a spoiled kid on holiday, Ronaldo had been hinting that would like to leave United since ten minutes into his Old Trafford debut in 2003, the two global corporations had struggled to agree on a suitably disgraceful asking price. But Real stepped up their bid this week after President Florentino Perez found £10 million in his coat pocket. 'It was change from the Kaka signing,' Perez explained. 'I paid for him with a £100 million note. I thought I'd spent all the remainder on groceries, but there was still a bit knocking around'.

With the acquisition of Ronaldo and Kaka, Real have recruited one of the most potent strikeforces in world football, but have done nothing about the defensive problems which saw them get barbecued in the knockout stages of the Champions League by also-rans Liverpool, and finish well adrift of superior rivals Barcelona in La Liga. Perez admitted: 'I guess it would make sense to strengthen our defence rather than spunk away a hundred million on goalscorers, since the back four has been our weakness for years now. But you see, it's really more about the prestige of having famous players than the actual balance of our squad, because I'm a bit of a dick.'

As for Ronaldo, he could hardly conceal his joy at finally leaving the club which has showered him with cash, affection and prestige. 'This is a happy day for me,' a spokesman read on the player's behalf while he bathed in ewe's milk with a selection of topless models from his private collection. 'Real have helped me realise my dream of being even more fucking rich than I was before. It is every footballer's dream to collect a signing-on fee which would house an entire community of displaced people in Africa.' He promised Madrid's legions of fans that the scrutiny attached to the historic transfer would not distract him from the task of 'diving blatantly, bitching about decisions, scowling when substituted, and doing that stupid little shuffle before taking a penalty.'

'But I am looking forward to leaving Real, too,' he added.

A spokesman for Manchester United said: 'We felt the offer was too good to refuse. Odd, perhaps, since we are one of the richest football clubs in the world, but I can't emphasise enough, we are purely a business these days: the actual game is almost totally irrelevant to us.' He consoled fans by revealing that Ronaldo replica shirts would be 'reduced from £50 to £45' in the Manchester United Superstore.
Posted by MWatson at 04:24